And so our journey begins. At the Film Apothecary, we come together to try to rehabilitate, rescue or reconsider some of the films you want to love but you know are so fundamentally flawed its impossible to look past its worst moments. Or can you?

What if we pick up that problem film, hold it up to the light, look at it from a different angle, and try to see it for the first time. Are some of these movies we’ve disregarded and dismissed simply one thought-hack away from being one of our new favourites. As someone who has made movies (all terrible), watched movies (too many to count) and obsessed over movies, I believe no movie is beyond repair. And so standing behind the counter, we take your order, go into the backroom, rummage through the vials of brightly coloured elixirs and choose just the right concoction to rescue our first victim…

KING ARTHUR: LEGEND OF THE SWORD. 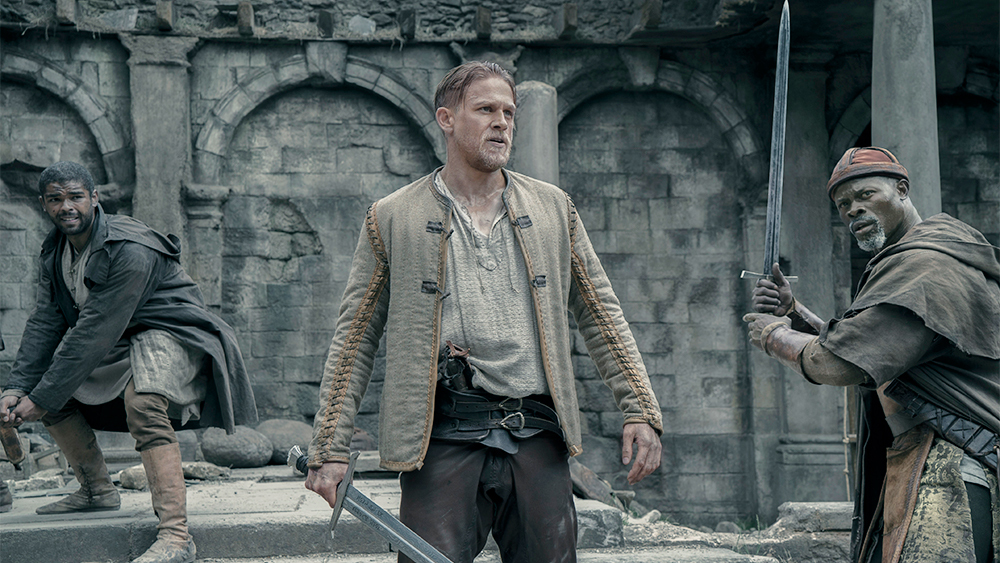 Guy Ritchie’s fantasy epic was a bit of a mess. It landed with a thud at the beginning of the 2017 summer blockbuster season, and was quickly heralded as the latest entry in Hollywood’s long line of expensive box office failures. Comparisons to blockbuster duds like John Carter, Battleship, Lone Ranger, Transcendence and other movies (not starring Taylor Kitsch or Johnny Depp) like Jupiter Ascending, Cutthroat Island, Hudson Hawk and Ishtar. Some of these movies I would argue are not as bad as their reputation. But they were all unquestionably critical and box office disasters.

King Arthur: Legend of the Sword left me cold, like most of Guy Ritchie’s films have. It seemed like an extended music video masquerading as a movie. It was disjointed, had significant pacing problems, and relied too heavily on montage and slow-motion-look-at-me special effects. But…

…in the days after I watched the film, this very flawed film had lodged itself in my brain the way no bad popcorn movie should if you’re living the best version of your life. But alas, there I was, wondering if King Arthur was a better movie than my first impression told me it was. Moments or sequences from the film kept worming into my brain, but they all seemed disconnected, as though they were scenes from different films, or… and (cue the epiphany)… episodes from a very ambitious, overwrought, big budget web series.

I went back to watch the film the following weekend (yes, probably the only repeat business the film enjoyed) and watched it with the stubborn feeling that the parts of this film were greater than its sum.

So now we arrive at this week’s ELIXIR:

Cue up your itunes, streaming service, blu ray, vhs… whatever you got. Start up King Arthur and watch the film according to the following rules:

Below you will find a table that divides King Arthur into 14 segments or episodes. Start each episode at the time stamp indicated, and stop it at the time stamp indicated. Watch only ONE EPISODE per day. This will take about 10 minutes out of your day, and will last two weeks. 14 days, 14 episodes — each with a title. Preferably, watch each day’s episode right before you go to bed, so you can digest the episode in your unconscious sleep brain.  This exercise takes patience, determination and a whole lot of good faith.

For those intrepid adventurers beginning this journey with me, welcome and thank you. Hope you enjoy the trip, leave a comment, let us know what you think of KING ARTHUR: THE Web Series. Did you enjoy it more than KING ARTHUR; THE MOVIE. Let the community know.

Please note all comments are moderated to keep this site family friendly. But I promise no civil hate-free comment (no matter how disagreeable) will be stifled.

Here we go. Skim the entire episode list below you start, then settle into a comfortable chair, and hit play… (and don’t cheat, one episode per day)

Thanks for joining me!